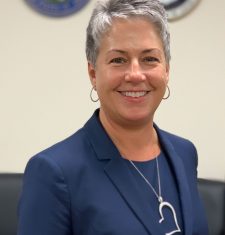 Since 2015, Ms. Benoit has led the Eastern Region’s Office of Counsel for the Defense Contract  Management Agency (DCMA), a Department of Defense agency which provides essential contract administration services for the Department of Defense, other federal organizations, and international partners. As the East Region Counsel, she bears overall responsibility for the delivery of Federal contract administration, ethics, and labor and employment legal services to clients throughout the Region. Over her 27-year Federal career, Ms. Benoit has served in several different legal positions with DCMA, as well as with the U.S. Army Natick Soldier Systems Center, in Natick, Massachusetts.

Ms. Benoit is admitted to practice in both Massachusetts and Maine, as well as before the U.S. District Court, District of Massachusetts, and the United States Supreme Court. She is a certified mediator in Workplace Disputes and a Massachusetts Notary Public.

Ms. Benoit and her husband, Michael Parsons, reside in Braintree, Massachusetts, with their blended family, and are supporters of Road to Responsibility and the Boston Higashi School.

This website uses cookies to improve your experience while you navigate through the website. Out of these, the cookies that are categorized as necessary are stored on your browser as they are essential for the working of basic functionalities of the website. We also use third-party cookies that help us analyze and understand how you use this website. These cookies will be stored in your browser only with your consent. You also have the option to opt-out of these cookies. But opting out of some of these cookies may affect your browsing experience.
Necessary Always Enabled
Necessary cookies are absolutely essential for the website to function properly. This category only includes cookies that ensures basic functionalities and security features of the website. These cookies do not store any personal information.
Non-necessary
Any cookies that may not be particularly necessary for the website to function and is used specifically to collect user personal data via analytics, ads, other embedded contents are termed as non-necessary cookies. It is mandatory to procure user consent prior to running these cookies on your website.
SAVE & ACCEPT